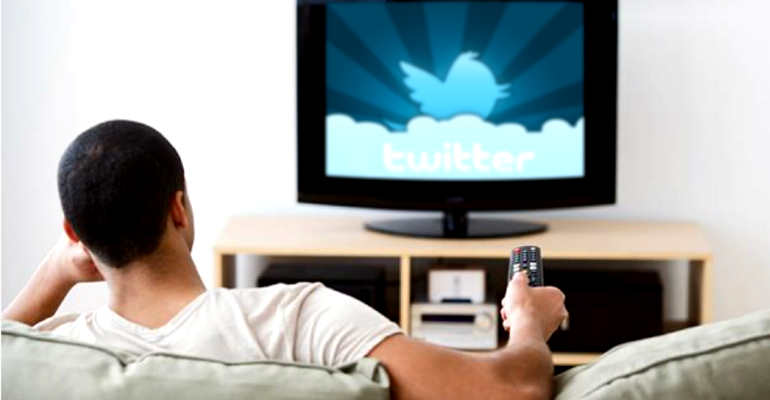 A growing number of US shows t are based on tweets. TV and social networks unite to enter into an unexplored adv market and Twitter TV Ratings undermines TV viewer ratings

The power of Twitter on the television. This is not science fiction, considering the trends of TV giants, consulting firms and social networks.  The question regarding the influence of tweets on TV programmes is already being analysed and this topic interests me because of the fortuitous coincidence between something I read and something else I saw on TV.

American television programs are already Twitter-oriented. One of my favourite talk shows is Late Night with Jimmy Fallon, which has a regular slot on hashtags and tweets. In case you don’t know him, Fallon is the anchorman who NBC hired  in 2009 to replace Conan O’Brien, who was the successor of none other than Jay Leno, the eternal rival of another superstar, David Letterman (this list gives an idea of what sort of TV we’re talking about).

Jimmy Fallon, with his 5-6 minutes of #latenight hashtag always explores the trending topic, in the USA but also often in the world. The credit goes to the authors who always find the right subjects (watch the episodes with #DadQuote or #WhyDontTheyMakeThat on YouTube), as well as an appealing format for viewers, who can ask questions to the guests during the program (who in Fallon’s show have included Barack and Michelle Obama, as well as characters such as Bruce Springsteen, Justin Timberlake or Ricky Gervais) and even send tweets who are then read out by famous actors (the most successful example online was the one with Steve Buscemi and the hashtag #MakeBuscemiSay).

Twitter has become a way to participate in television, not only to comment programs. And the potential of microblogging is quite extraordinary. This invasion of socials on TV is increasingly widespread and has led television giants like Nbc, Fox or Cbc, as well as agencies like Nielsen and social networks to try to ally to start exploring the business that is being created.

Using social networks instead of TV ratings is one of the strong ideas that have led Nielsen, for example, to introduce a measuring tool like Twitter TV Ratings, which in the USA (and starting from December 2013 it has been announced in Italy where is far-back available the SocialTvMeter by BlogMeter as Vincenzo Cosenza pointed out to me) measures microblogging conversations on television by identifying the account number and makes calculation based on the amount of tweets connected with a specific TV program and the relative visibility of tweets.

Viewing TV program clips of on Twitter is already a reality in the USA and microblogging is so immediate that users prefer it by far to other socials when they have to interact with programs in real time. There is an immediate correlation with TV advertising and with the potential to reach the commercial targets that are involved in this new world of adv, still a hybrid between TV and social networks.

Will social networks disrupt the way in which TV works, and its content? Nobody knows what will happen yet, what is certain is that the invasion or hybridisation is already taking place. And it’s equally certain that, both for socials and for TV, not pitching in and experimenting on all fronts (from the format of programs to the calculation of the audience) means missing a bus that is expected to drive fast and be full of business opportunities.

Can you find a CEO on social media? Lyle & Scott hopes so.

Twitter Lets You Add 4 Photos to Tweets, Tag Anyone in Them