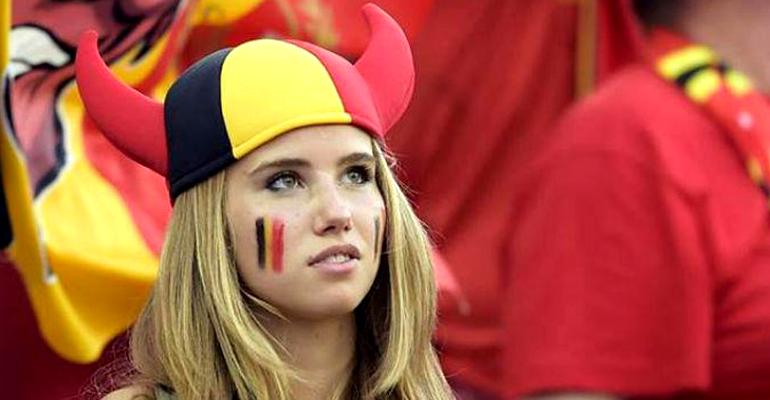 She had become a model for L’Oreal thanks to a picture taken on the stands during Brazil’s Championship and spread via Twitter. Now she’s lost her contract because of a photo on Facebook

After having reached fame though Twitter, she lost it because of Facebook. The  17 year old  Belgian Axelle Despiegelaere had become famous after pictures taken of her on the stands during Brazil’s Championship and spread via Twitter had been noticed by the multinational cosmetics firm  L’Oréal, which then had her sign a modeling contract. But you could say “she who lives by Twitter will perish by  Facebook” since the young football supporter lost her contract due to another type of picture, posted on Facebook, showing her  at a hunting party in Africa accompanied by a rifle and a prey. That was enough for her modeling contract to vanish just as fast as it had been signed.

Axelle Despiegelaere’s sudden fame, achieved through the socials, had surprised me, and I had very recently published a post on this event (Axelle Despiegelaere, the fun turn into a model thanks to Twitter). But the new chapter of her story looks like a case history on brand reputation. What happened? A picture was taken of Axelle during the World Championship matches in Brazil while she’s supporting Belgium on the stands, L’Oréal notices her and there and then has her sign a modeling contract. A few weeks later the Web finds out that the 17-year old Red Devils supporter on July 1st. had naively posted on her Facebook profile a politically incorrect snapshot: the usual smile, the savannah in the background, a rifle in her hand and a dead antelope at her feet. All this was accompanied by the sentence: “Hunting is not a matter of life or death. It’s much more important than that. This was about one year ago, ready to hunt Americans today”. Axelle was referring to the upcoming match between Belgium and the United States for the World Championship (on July 2nd at Salvador de Bahia) and couldn’t imagine that ten days later that picture would lead to a disaster.

L’Oréal was hit by a wave of questions and accusations posted on Twitter and Facebook and took action by communicating that the relationship with Axelle was over, that “the contract with this girl was expressly created for a cooperation that targeted the social media” and that “L’Oréal no longer tests its products on animals nor does it assign this task to others”. Why did they stress this last point? Because it’s the real issue and the only reason why Despiegelaere’s story didn’t end well. For more than ten years L’Oréal has been accused of testing its products on animals: animalists often protest and condemn and many of them have used the hunting photo of the young supporter on Facebook to bring the test issue up once again.

She who lives by Twitter will perish by Facebook? Axelle Despiegelaere’s story set the fur flying on social networks. She closed her profile and tried to play the case down, but it wasn’t enough to calm the tensions that had been nourished by very different reasons,  worlds apart from the naïve enthusiasm that had led her to publish the picture. Just by reading the quick repartee following @AlyWeisman’s tweet, you can see how a trivial matter can produce consequences requiring real social media crisis management. The Senior Entertainment Editor of @BusinessInsider forwarded the offending picture asking @Loreal @LOrealParisUSA “What do you think of this post by your new model Axelle Despiegelaere?”. Weisman was accused of being jealous and was called a “vulture”,  but anyhow she started off tweets from animalist associations and  customers of L’Oréal (which didn’t write a word on its Twitter profiles). So in the end Axelle went back to being just a beautiful 17 year old Belgian girl.

US Tech Company Had 20 Employees On Missing Malaysia Airlines Flight