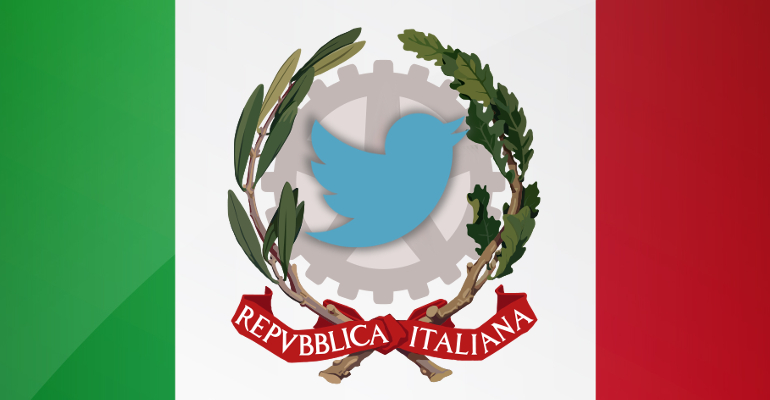 This year’s election campaign has been more orientated towards social networks than ever before, with many candidates taking to the web in order to fight their battles. Almost all politicians have a online profile now, Facebook and Twitter have become musts for any candidate, be they aspiring regional councillors or putting themselves up to be Prime Minister.

However a quick look at politicians’ tweets shows that at best they act in a similar way to news agency brief, or at worst like spam, a digital version of slapping up an election poster on the wall of your house. This use of Twitter as a no-reply email is widespread, and without going into the politics of individuals, there are few people who use micro blogging to communicate with potential voters.

Mario Monti moved into politics with a tweet, but a month or so later admitted his ignorance of the medium, and that he delegates the management of his @SenatoreMonti account to his staff.

Silvio Berlusconi announced @berlusconi2013 and his digital followers with some enthusiasm, but teh PDL leader’s account, which was accused of having gained too many followers far too quickly, ended up almost immediately in the margins of a communications strategy securely wedded to the television.

Pierliugi Bersani has hardly promoted his official profile, but he has four times the number of followers of his eternal rival Berlusconi. His slogan ‘The Right Italy’ goes alongside the ‘wrong’ handle @pbersani, and for the most part just provides schedule information and publishes his statements.

There are several applications online which capture party leaders’ social media activities, with la Repubblica’s Twitter square the most visited in Italy. They offer a small peak into the electoral campaigns and what social media means for Italy’s politicians.

Clicktivism and the Italian Obamas

Leader of the Movimento 5 Stelle party Beppe Grillo is the prime minister of the online public, and that’s hardly a surprise; his party was born from his blog and he uses the internet and social media as a way to engage with the people while avoiding traditional media. He deserves recognition for having brought clicktivism to the real world: apart from M5S, no online movement is yet capable of bringing their strong internet support onto the street.

Mayor of Florence Matteo Renzi, who put himself up as candidate for the Democratic Party leadership, is no stranger to the online world, so much so that he was accused of being remote controlled by an iPhone. On his @matteorenzi profile he talks about Fiorentina and politics, speaks as mayor and frequently uses the hashtag ‘sapevatelo’ (you knew it). He’s even brought that attitude into Florence’s city council, where there is now an Open Data section on their website and Twitter profile (10.681 followers at last count) that tweets on everything from resolutions to meals of the day in local schools.

Renzi is battling it out with Grillo for the position of Italian digital prime minister, but both are some way behind the world champion, the king of fighting electoral campaigns online: Barack Obama.

For his campaign he could count on a dream team of social media strategists, web designers, 50 digital analysts, the Victory Lab and an army of supporters organised by telephone, computer and on the street. From his official website to his smart apps and his MySpace profile, his attitude marks a clear difference between him and Italy’s politicians. He doesn’t use social media, he is a social network, one that lives by his followers and Big Data.

The Politics of Big Data

Twitter offers only a partial view of social media, however it is the one most commonly used by Italy’s politicians and as such is important for whoever wants to understand the secrets and limits of the digital democracy that there might be in the future.

The keyword here is Big Data, the huge pool of data online from which you can gather information on mainstream digital media users. Italian newspaper La Stampa conducted an experiment with this data through voto2013, a tool which enables the gathering of qualitative and quantitative information from political discussion on social media. It analyses the flow of information and content that people share on social media looking to find and understand trends. It doesn’t matter what politicians say as much as what the online community says about them and their politics.

Barack Obama built his electoral power on this mine of information, while Italian politicians are still struggling with allergies to RTs – there is still clearly much to do. In the meantime we can begin with simply learning netiquette. Almost all of our candidates could do with listening to the advice of Jay Baer: ‘Focus on how to be social, not on how to do social’.

Mothers of Young Children Spend Most Time with Smartphones